Q - The three members of Sklamberg & The Shepherds hail from different parts of the world (the UK, USA and Siberia) – do you feel you are bringing together different klezmer traditions in the group?

A: That’s difficult to say because we have all learned from the same tradition - that of the Eastern European Jews. I suppose the ways that each of us interpret the music (as an Eastern European, an American and a western European) might be different, but overall we blend our personal styles together while exploring our common roots.

Q - What is it about klezmer that has enabled it to survive and remain so popular?

A: Klezmer is popular because it’s a music that is unpretentious, direct, easy to get to grips with, spiritual and emotional whilst retaining a certain ‘exoticism’ that really hooks people.

Q - You bring Russian and southern Mediterranean music to the mix – how does this fusion work?

A: The music is deeply rooted in the Jewish tradition and we find that there are wonderful similarities between our musical experiences … but there are also some differences, and finding ways to merge and blend these differences means that we are creating something unique. Many of the melodic forms, modes and rhythms of south Mediterranean and Eastern European musics are shared. There are some surprising similarities, although quite often the details of interpretation can change. Finding the common ground is one of the real joys of playing music with different people!

Q - Can klezmer be considered a ‘world’ music, due to its wide dissemination among the Jewish people?

A: Klezmer is not a ‘world music’. It’s a culturally-specific music that has grown from wedding music played for and by Yiddish-speaking people. Jews who moved all over the world from other places outside of Eastern Europe (Sephardim, Mizrahi, Greece, Italy, Ethiopia, China, India) all have their own music that has little to do with klezmer music apart from some of the prayer modes. The music industry created the concept of ‘world music’ in order to sell a product. I prefer to refer to culturally specific music as just that, culturally specific music. The concept of ‘world music’ often seems to be more about fusion than about specificity.

Q - You include original material in the repertoire – is this important for keeping Eastern European Jewish traditions going?

A: Absolutely. We are not a museum piece, but part of a creative, thriving and living tradition. We are members of a very large international community that is keeping this tradition alive by reinterpreting older music and by writing new music in the old style, pushing the style forwards into the modern world.

Q - Perhaps you could say a little about the instrumentation of the trio – is it unusual to have a piano in the klezmer tradition?

A: We will be playing a variety of instruments: two guitars, accordion, piano, clarinets and of course our voices! Bearing in mind that klezmer music came largely from the urban environment, it could easily have been possible for pianos to have been used in Eastern Europe. The type of small ensembles that have been stereotyped as ‘traditional’ tended to be made up of more portable instruments, so piano wouldn’t have been a part of those.


Up until 1860, it was forbidden for Jews to play their own music on ‘loud instruments’, which included clarinet. It was Tsar Nicolas who allowed a certain emancipation of the Jews and that was when louder instruments (clarinet, brass etc.) started being used.

We are not playing strictly ‘traditional’ klezmer, and we use our own personal histories as well as our knowledge of the past to bring who we are to our performances (hence electric guitars!).


Q - Klezmer has a reputation as a party music – is there a traditional dance associated with the music, or should we just sit and listen?

A: Klezmer music developed as wedding music, so yes it definitely is party music! There are also many different genres of dance within the tradition and many different types of steps, so yes, we’re more than happy to have audiences on their feet. There is also a large part of the repertoire that is ritual music though, so that isn’t so much for dancing. We perform a number of slower songs, so these are more for listening to.

Q - Could you say something about the texts you use in the songs?

A: Looking through our songs we see a good, idiosyncratic mix of ideas and moods reflected in the pieces we’ve either written or chosen, which have now found a perfect home within our trio! The Viglid, for instance, is a beautiful Soviet-era Russian lullaby translated into Yiddish that Lorin and Polina had enjoyed playing together on several occasions before we incorporated it into our program. Polina’s romantic compositional aesthetic has led her to compose several gorgeous ballads, which, when combined with verse by some of our great Yiddish poets, inspire a subtle use of our intertwining voices in the service of lyrics both wistful and hopeful. Lorin’s work as a sound archivist at the YIVO Institute for Jewish Research in New York has led to him rediscovering historical gems, such as Song of a Tractor-Driver, a deft and witty workers’ song from 1950s Poland. We also continue to be inspired by the Jewish spiritual realm, particularly the joy and imagery of the Hasidic world, with such songs as Polina's What can we say (from the Passover cumulative song tradition) and Sankt Besht, set to a poem by the great Itzik Manger, about the founder of Hasidism himself. And no show of ours is complete without a Yiddish drinking song or an Ural Mountains folksong in both Russian and English! 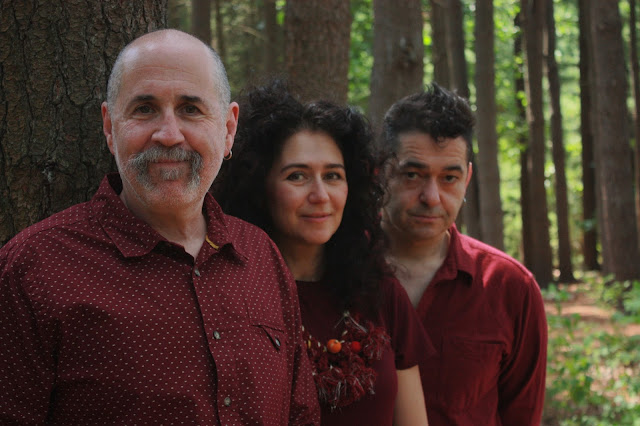 ON TOUR next: SKLAMBERG & THE SHEPHERDS

Making Tracks is a fresh concept in programming on the British live music circuit, launched in 2010. This travelling season of concerts brings new and exciting music from around the globe to a local setting, in partnership with some of the best music venues in the UK. Fabulous international music coming to a venue near you!